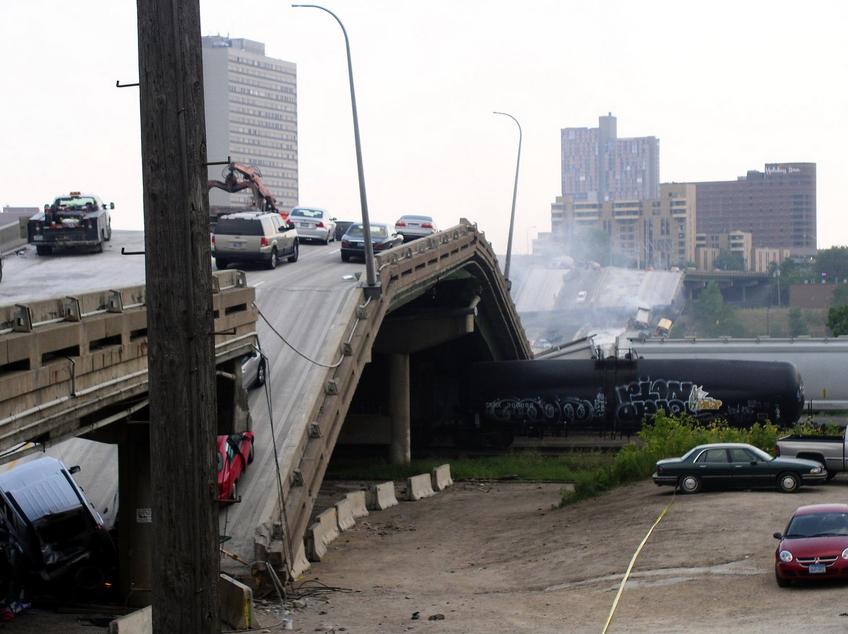 If you missed it in the news, the bridge that takes I-35W across the Mississippi River in Minneapolis fell into the river last night. If you want a full report, you’ll have to look elsewhere (I can point you to CBC); some highlights:

It will be a few days before everything gets sorted out; for now I imagine people are still in shock and not quite sure what to do. At the end of the investigation (which may take a year or more), the panel will conclude either it was a freak accident, or will give a number of guidelines to keep this from happening again.

Unfortunately, this isn’t the first time a bridge has collapsed - we only need to look back to last October when the de la Concorde freeway collapsed in Laval, just out of Montreal. Unfortunately, it seems unlikely that this will be the last time we see this sort of thing. So what is the difference between a bridge that is 40 years old and expected to last another 15 at least, and the computer monitor that you’re reading this on, which is likely less than two years old, and will likely find itself replaced within that much time going forward? I would suggest that the difference is what we expect of our engineers, our civil engineering in particular.

Part one is the Code of Ethics. Engineers are professionals, whose foremost concern is the welfare of the public. Engineers are part of provincial associations that have developed a Code of Ethics to this end. These associations are self-governing, meaning they have the power to remove members for violations of the Code of Ethics. This means that if an Engineer disregards the public welfare, or doesn’t properly perform his duties or due diligence, even if he doesn’t face criminal charges, he can have his permit to practise engineering, which is probably his livelihood, revoked. Because of this, the Code of Ethics has become a touchstone in both the day-to-day and the extraordinary decisions an engineer will face.

Part two is there is almost no allowance for failure. Most people are shocked when they learn that the space shuttle missions are given a 1 in 50 chance of not coming home (at 1 in about 75, they’re beating those odds) because they would never accept that in their homes, offices, bridges, or dams. We expect that civil engineering projects will perform, no ifs, and, or buts. The downside of that is technological change can be very slow, as everyone wants to use the methods that are time tested. Although we’re fine with replacing our computer every couple of years, we expect our house to last forever.

But engineers are up to the task. If the report suggests changes in how engineering work is performed, I have no doubt there will be changes. Failures provide the chance to learn. No engineer would claim to understand every natural law, and thus all design work is completed using a factor of safety, which can be as large as 3. That means that the structure is designed to withstand three times its expected load. This is done to cover off the unexpected, the un-understood, and the unknown. The Quebec Bridge failures of 1907 and 1916 fundamentally changed the way engineers in Canada went about their work, and the redesigned bridge stands yet today as the longest cantilever bridge span in the world. In Canada, the Ritual of the Calling of the Engineer was set up shortly afterwards, and folklore says that the Iron Rings presented are made of the failed Quebec Bridge to serve as a reminder to him of his obligation to the public.

So I have faith in our Civil Engineers and their work. If there’s a problem, I trust they’ll fix it. I’ll see you on the other side of that bridge!

picture via Wikipedia, and is public domain.

Quit making excuses for Civil Engineers. Bully for you that you trust them, but there have been too many reports of problems with bridges & buck passing in the past ten years or so to say these are random incidents. If bridges were designed properly they would not collapse. Maybe its about time the engineers who design these things were held accountable & tried in a court of law.