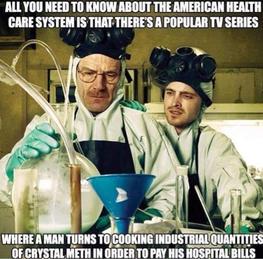 All you need to know about the American health care system is that there’s a popular TV series where a man turns to cooking industrial quantities of crystal meth in order to pay his hospital bills.

While the recent revelations from Snowden have put a spotlight on the efforts of the NSA to spy on seemingly everything, one of the surprising results is that those that were labelled ‘paranoid’ and dismissed in years past no longer seem paranoid enough.

AIG and the American Dream

Over the last week, the newswire has been flooded with stories about AIG, first about the retention bonuses it had paid out, and then about the angry backlash. Much has been written about what caused AIG to get in this mess in the first place, and whether or not American taxpayers should be bailing out the company, and so I won’t rehash that, but why is everyone so mad all of a sudden? I think the answer lies in the American Dream.

I read an article about a week ago describing it as a disgrace, how Bush has been treated by the American people and media. I sat back and realized it’s been a LONG time since I’ve heard anything nice about George W. Bush. Regardless of how good a job Bush did, or did not do, when the American media starts bad-mounthing the President, it implicitly gives everyone else permission to due the same.