This was too priceless to pass up….

A little over a week ago the Olympics in Vancouver came to a finish, which concluded with the Men’s Hockey final between Canada and the United States. It promised to be epic, and it delivered. Being away from home, I had the ‘pleasure’ of pulling out my big Canadian flag and watching the game with some American friends, although I did wish from time to time that it was a Canadian network (instead of NBC) so that the commentary on the game would have been better. But I digress, it was an epic game, and an epic finish indeed with Sidney Crosby scored the game-winning goal for Canada seven minutes into overtime.

Reports since have claimed that it was the biggest event in Canadian sporting history, with 80% of the population tuning in at one point or another. To illustrate the effect of this, EPCOR (the water utility in Edmonton, Alberta, Canada) release a graph showing the city’s water demand while the game was on. It’s amazing to watch the swings between when the game picks up and the end of the periods. 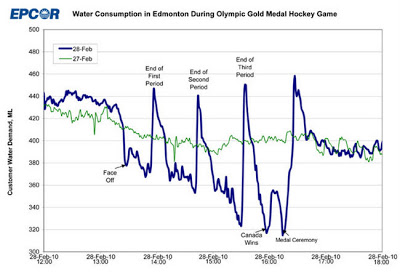 (The green line represents water usage on the day before the game, or usage on a ‘normal’ day)