In this article I’ll talk about how I automated updating my Pelican-generated blog using a combination of PyPI, Travis-CI, and GitHub pages. This is something that has been in the works since I first switched by blog to Pelican.

If you are wanting to follow along and do this yourself, I will assume that you have a Pelican blog that you can generate locally. (Even if you move to this method for your public version of your blog, it can be helpful to be able to generate your blog locally to preview theme changes and new articles.) Many of these principals will apply if you use a different static site generator, but I’ll focus on using Pelican.

Static site generators (including Pelican) are fundamentally different from dynamic websites (such as those run on WordPress) in when the pages of your website are generated, or rendered. With a static site, all the pages are completed rendered beforehand, and the resulting HTML is uploaded to the webserver. Dynamic websites, on the other hand, generate the page (and that one only) as you request it. For static websites, the advantages include:

On the flip side, the disadvantages (or trade-offs) of static sites are:

My solution to being able to update my Pelican site auto-magically is what this post details. We will use GitHub for storage, PyPI for Pelican extras, Travis-CI for processing (site-generation), and GitHub Pages for site hosting.

My setup stores the site data and configuration as a repo on GitHub. This does require some understanding of Git, but GitHub makes it very approachable.

Configuration consists of the Pelican configuration (two Python files), my requirements.txt file which will tell Travis-CI which packages to install, and the Travis configuration file (.travis.yml) itself.

The theme of the site (which is sometimes stored next to the site content) is actually uploaded as a module to PyPI (see the next section).

The posts are stored as “flat” text files, mostly written in Markdown.

One thing to be aware of is that your source material is publicly available on the free version of GitHub. I don’t consider this an issue as my blog is publicly available with the same content. However, this might be an issue if you store pre-publication drafts or un-watermarked images as part of your blog. Also consider whether you want email addresses on comments to be publicly available. You can create private (i.e. not publicly viewable) repos if you are on one of GitHub’s paid plans, but then you’ll also have to pay to use Travis-CI.

Because we are automating the generation of our site, we want to make sure we have replicate-able builds. One way I did this was I pushed a copy of all the plugins I used, plus my theme, to the Python package index, PyPI.

Pelican, historically, has used communal repos (on GitHub) to host plugins and themes. To use these themes and plugins, you would clone these two repos to your local machine, and then point your Pelican configuration to these local folders. However, maintaining these local paths becomes extra complicated on Travis-CI, where the filesystem is mostly out-of-sight and if you get the link wrong, your build will just crash. Furthermore, versioning is complicated because you have to specify a Git commit hash (which looks like this —> 0d4b2c26f8703fe9665fd4e94bba31be02e51fc8), and if you upgrade one plugin (by selecting a later commit), you end up upgrading all plugins. Python modules, uploaded to PyPI, is an established solution that works well for both these issues.

But many pelican plugins aren’t available on PyPI (although a surprising number are). So my first order of business was to check PyPI, and upload any missing ones:

Packaging other’s code and posting it to PyPI felt kind of wierd. I wasn’t so much worried about licensing, but sometime people (me, at least) are more attached to their project than the text of the license might suggest. To this end, I decided to name all the plugins I posted to PyPI in my own ‘namespace’ (i.e. minchin.pelican.plugin.[something]); if the original author does post the plugin to PyPI themselves, I can always point mine to their “official” version.

Packaging the theme was less of an emotional issue — although it is based on DandyDev’s Bootstrap3 theme, I have modified it considerably, beyond what I though would be accepted back upstream. In other words, I feel like the theme design is “mine”.

In specifying a Pelican theme, the Pelican configuration file expects a folder location. Installing the theme as a Python module means that I can’t know the file location ahead of time, but I can ask Python at run time! So my theme has a short function:

that is called in the pelican configuration file:

(Please feel free to copy this coding pattern! I borrowed it from a Sphinx theme.)

Things posted by me to PyPI, as a community resource, I feel should have some utility beyond my own. The theme is perfectly usable, as is, for other site, but doesn’t give you any simple options for changing the colour scheme, but I’m working to change that too.

Travis-CI really is a wonder. At it’s core, what it sets out to do is make it simple to run automated tests for open source software. (The “CI” stands for “Continuous Integration”, which is just the fancy way of saying “run the tests all the time!”) At its core though, Travis provides a Linux virtual machine, and therefore, we can have Travis build and publish our blog, if we can figure out the automation steps. In Travis-land, we configure building our blog as the “test” and uploading as the “deployment”. Travis even has a built-in () deployment procedure to push a static site to GitHub Pages!

Several other articles exist online explaining how to publish your Pelican blog like this via Travis, but the vast majority rely on a bash script rather than Travis’ build-in deployment method. I didn’t want to deal with bash; working on a Windows machine at home makes debugging bash scripts a slow and painful process done on Travis directly. I do use Invoke (a Python library) to store the command I use to build the blog (mostly so I don’t have to remember it and type it out each time), which specifies the Pelican preference file to use, and stops the build if a Pelican warning is encountered. The actual commend is:

So my final Travis script (below) does four things:

As long as your code is publicly available on GitHub, Travis-CI is free to use.

The actual hosting is done by GitHub Pages. There are a few settings we need set up to get this to work the way we want: 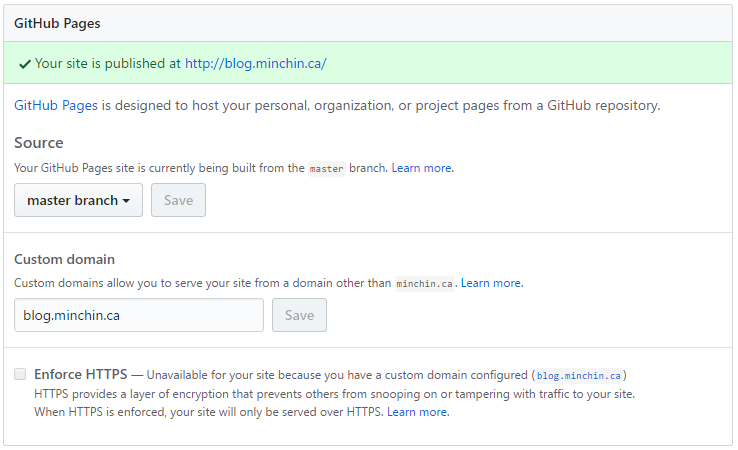 Yes, this is more work to set up, that just publishing your blog from your desktop computer. But the advantage is now, anytime you push a change to GitHub, your blog will automatically be updated. This change can come from your home computer, or you can do it directly from the GitHub website. This means that you can update your website from anywhere you have an internet connection! You now have a static site that you can update from the internet. Congratulations!

Other posts under Essays