The Wonder of Coastlines 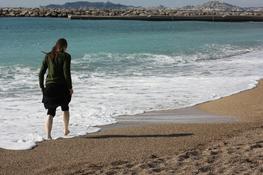 A year ago, I travelled to southern France with my honey and some friends. As we visited Marseilles, a port town on the Mediterranean with a history stretching back some 2,600 years, we came to a plaque that commemorated the start of that history. Along the old harbour, the bronze reads “Here, in 600 BC, Greek sailors from Phocaea, a Greek city in Asia Minor, landed. They founded Marseilles, to serve as a beacon of civilization to the west.”

Olympic Hockey and Water Use

A little over a week ago the Olympics in Vancouver came to a finish, which concluded with the Men’s Hockey final between Canada and the United States. It promised to be epic, and it delivered. Being away from home, I had the ‘pleasure’ of pulling out my big Canadian flag and watching the game with some American friends, although I did wish from time to time that it was a Canadian network (instead of NBC) so that the commentary on the game would have been better. But I digress, it was an epic game, and an epic finish indeed with Sidney Crosby scored the game-winning goal for Canada seven minutes into overtime.

Reports since have claimed that it was the biggest event in Canadian sporting history, with 80% of the population tuning in at one point or another. To illustrate the effect of this, EPCOR (the water utility in Edmonton, Alberta, Canada) release a graph showing the city’s water demand while the game was on. It’s amazing to watch the swings between when the game picks up and the end of the periods.

The often supplied answer, in some circles, to any question that seems to do with economics is “let the market decide!” However, the limits of what the market can do effectively are rarely discussed. What the market allows is for rational actors to compete for limited resources. Where that falls apart is where one of those assumptions fails: the actors cease to be rational, the actors can’t compete, or the resource (or demand) is not longer limited. And often times, when someone faces an out-of-pocket hospital bill, all three assumptions fail. When someone is severely hurt, it is hard to argue that they are in a frame of mind to make rational decisions; people in the hospital are rarely in a state of mind to ‘comparison shop’ hospitals; and many people value their health to such a point that effectively their ‘demand’ is unlimited (think what life insurance policies pay out…). In short, it seems to me that leaving the market alone to set the price of our health care services is not a bright idea. I value my health and agree that healthcare professionals should be paid well for their services, but I am much more appreciative of healthcare I can actually afford!

AIG and the American Dream

Over the last week, the newswire has been flooded with stories about AIG, first about the retention bonuses it had paid out, and then about the angry backlash. Much has been written about what caused AIG to get in this mess in the first place, and whether or not American taxpayers should be bailing out the company, and so I won’t rehash that, but why is everyone so mad all of a sudden? I think the answer lies in the American Dream.

I came across a very interesting “social science fiction” essay today at All About Cities, by Wendy Waters. What she proposes is that over the next 20 (!) or so years, American cities, burdened with the efforts of keeping up their infrastructure and their level of prosperity, will give up on trying to get the money needed out of the federal government, and so, starting with New York, will declare independence to take control of their financial house. Within a few years, most major cities in the States will follow suit, and Americans and their companies will flee Canada and these new city-states. Give it a few more years, and these cities states will band together to form a union à la European Union, with the end game of Canada and the United States become a common political union, built from a basis of these city-states. I was very impressed when I first read this, because it’s one of the few probable explanations of how Canada and the States could merge into a single political entity. However, I can’t help but poke a few holes in the logic.

What’s right about America is that although we have a mess of problems, we have great capacity — intellect and resources — to do some thing about them.

Oil is at an all-time high, and everything seems to be pointing to the price to keep going up. So what does that mean to you and I over the next few years?

Problems on the Interstate

The Eisenhower Interstate program was brilliant for its day — it created a national system of freeways that crisscrossed the United States, and has done much to provide the infrastructural backbone to today’s booming service industry. But the interstate has in turn caused other problems, including suburban sprawl, funding and mode dependence, and a lack of vision.

As a regular reader of the Gateway, I have read a fair share of ideas that are a little thought and controversy producing pieces, but thought I would add a little to the mix myself. I was reading the Editorial entitled “Armoured bears don’t threaten faith” by Ryan Heise in the November 26 edition. Although he raises some valid points, I think he has been rather simplistic and one-sided. 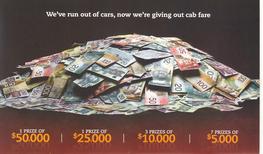 I got a kick out of a flyer that came in the mail the other day. The Alberta Cancer Foundation has launched its annual “Cash and Cars” lottery. The flyer starts with a display of the cars, some 26 in all, starting with the SLR McLaren. Following is a page for the cash prizes (valued between five and fifty thousand dollars), showing a pile of cash and the tagline “Consider it cab fare”. I guess everyone wins a “car”, even if it’s a taxi ($50,000 will give you quite the taxi ride!). It cracked me up.

I’ve decided to formalize some of my thoughts and launch a new series: Social Commentary. Just like the many interesting things I find on the net, every so often I come across something in the “real world” that I want to address - this will create an easy way to centralize (and then find) these thoughts. Enjoy!