I went on a hike (and did a little bit of mountain climbing too) this morning with my camera and so ended up with a ton of cool photos. I was actually hard to decide which ONE to put up for today, but here it is! We were up by a waterfall and the sun was streaming through the trees above us. I managed to land just the right angle to get this beautiful lens flare. Enjoy!

On my way home from some morning errands, I spotted a snail working its way along the concert lawn edger. In the few minutes I took to get my camera from inside, he was gone (I have no idea where he could have got to…), but I did find his buddy working across the grass. Now this guy’s famous!

The effect of the soft background is created by increasing the f-stop so not everything is in focus. The flip side is you need a longer exposure, so I had to use a tripod to get this shot.

Tonight I was after a nighttime theme again. If you point your camera at the stars and leave the shutter open long enough, you end up with these cool star trails. The problem with these pictures is they take a LONG time. The next one in the set (7 minute exposure) got ‘ruined’ because the clouds rolled in and covered the stars. At that point, I decided I’d better call it a night.

I was watching an outdoor movie until we got rained out. What the rain did do is make for some fun photos. This one is taken through the rain-streaked windshield… 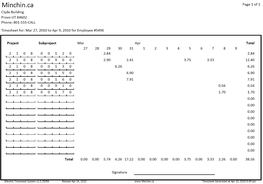 The Minchin Timesheet System is designed to provide an easy way to keep track of time spent on various projects, especially in situations where the user is working on several projects serially. From the main interface, click on “Record Time Stamp” will prompt the user for a project number, a subproject number, and their employee number. When they are finished, they click “Record Time Stamp” a second time to log off. A button (“Am I Logged In or Out?”) provides a simple way of confirming their status. A third button (“Generate Timesheet”) will automatically generate a timesheet for the employee, breaking down their time by day, project and subproject, and saving the result as an easy to email or print PDF.

Introducing my version of the Transportation Research Board (TRB) reference style for use with the reference manager in Microsoft Word 2007 and 2010.

Chinese Public Transportation: A History and a Vision to the Future

Public transit has existed in China since 1969 with the opening of the Beijing Metro. Today, Shanghai has the largest metro system in the world, and is one of ten mainland Chinese cities, in addition to Hong Kong, that have a metro system. In addition, there are thirty more cities in China with metro systems either under construction or in planning stages.

The Hong Kong opened its metro system in 1979 in an effort to reduce traffic congestion. Today, public transit on the whole is very popular, with over 80% mode capture rate. Hong Kong continues to expand its rail transit network, but at a slower rate than many cities in mainland China. The system operator has also taken on the role of developer, generating more profits from property management than railway fares, and in the process has provided a very successful example of Transportation Oriented Development (TOD) policies in action, which are a model for TOD efforts worldwide.

In summary, a short compare and contrast between China’s fast growing cities of today and post-World War II American cities is provided. Both are growing (or grew) at incredible speeds, have rising middle classes and significant economic growth. What Chinese planners can note is that in America, highways were chosen over public transportation options. Today, that means that traffic congestions remains a major problem in many American cities. Additionally, funds to maintain infrastructure have waned as the cities’ growth has slowed with the slowing of economic growth.

Sunday Quote #2: “We Were Found Equal to Our Tasks”

When, in situations of stress, we wonder if there is any more in us to give, we can be comforted to know that God, who knows our capacities perfectly, placed us here to succeed. No one was foreordained to fail or to be wicked.

When we have been weighed and found wanting, let us remember that we were measured before and were found equal to our tasks.

We cannot do great things on this earth, just small things with great love.